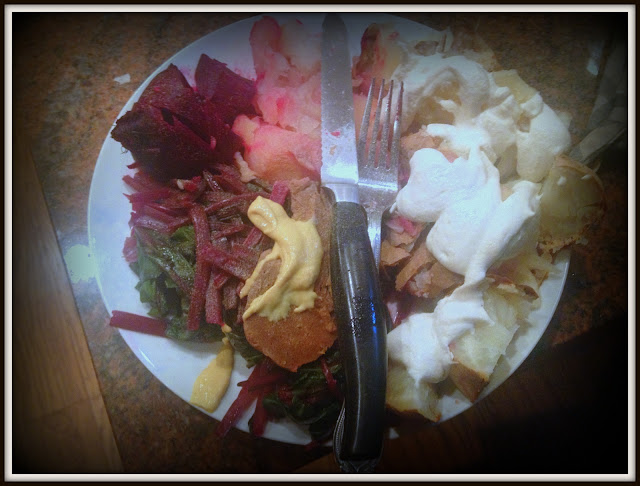 OK, even I'll admit this isn't the prettiest plate I've put out there.  I didn't even intend to blog this, but it was so good and so easy, I had to share.

I was walking through my local international food market, though nothing I make here is difficult to find, and I was watching a lady grab a head of beets, three tied together, and rip off the tops and put them back taking only the beet portion.  Besides the fact that she was throwing one of my favorite parts of the beets away, I think she thought she was saving money by not having to pay for the weight of the greens.  Obviously she doesn't read because one bunch of beets, greens and all, was a flat price of 99¢.  I almost grabbed her greens to throw in with mine but thought that a bit tacky.

So in preparing my dinner last night I went through an inventory of what I had in my fridge and came up with this uniquely Eastern European inspired dish.  If I had to pick a country I would say Poland, though it could be anywhere that they eat a lot of root vegetables.

Beginning to end this took 5-10 minutes of prep time and 45 minutes to an hour to cook.  The cooking was done mostly in the oven.

Preheat the oven to 400 degrees Fahrenheit.

When I roast something in the oven I often roast way more than I'm going to eat at one sitting, knowing that the vegetables can be used in a variety of meals, including salads, in the future.  I removed the greens from the beets and cleaned the beets, some turnips and russet potatoes.  I didn't peel the beets or turnips.  After I cleaned the potatoes I poked a couple of holes in them.  Once you've opened your oven after a potato explodes (or microwave), you'll never forget this step.

I wrapped the beets in aluminum (three to a packet), the turnips in aluminum two to a packet, and the potatoes straight in without aluminum.  Into the oven they went for 45 minutes to an hour, dependent upon the size of your vegetables.

I did have a bunch of seitan that I made previously so I sliced off a piece of that as well.  Clean the beet greens well.  One trick I learned is to fill your sink with water and float the greens on top, moving them around.  This works for lettuce, herbs, spinach and any other greens that you need to prewash.  You'll be shocked to see how much dirt and sand are left at the bottom of the sink.  The leaves float above and the heavier dirt and sand sink below.  Chop the greens into about 4 inch pieces.

When there's about 8 minutes left on the vegetables in the oven, put a pot on the stove with about 1 1/2 inches of water and a steamer basket above (if you don't have one of these, use a metal colander.  Add the greens and seitan to the steamer basket and cover.

Everything should come out at the same time.  Using a dry paper towel, or several, remove the skin from the beets being careful not to drop them on anything as they STAIN.  Use the same procedure for removing the skin of the turnips.

To eat I love sour cream on the potatoes and lots of Grey Poupon Dijon mustard on the rest.  Before I ate this I squeezed some fresh lemon on all of the veggies including the greens but not on the potato.  Salt and pepper to taste.  Delicious, comforting and I at the whole thing.