It was my dad's 79th birthday and a good chunk of my family has gone vegan.  We wanted to come up with something that would be easy and tasty, and that the non-vegan contingent would try.  I've made the first sausages several times and they have the texture and flavor of spicy italian sausages.  They are made of a vital wheat gluten base with lots of spices.  The second one has a softer base and is held together by Xanthan Gum, which works as a thickening agent or emulsifier.  You would us it in place of wheat gluten in many recipes.  There is also Guar Gum which acts the same way but would be used in colder foods such as ice cream.  Here's what Bob's Red Mill, who manufactures both, says about them.    Xanthan Gum vs. Guar Gum

The first recipe I used was this (the sausages on the left side of the picture):  This sausage is gluten free. 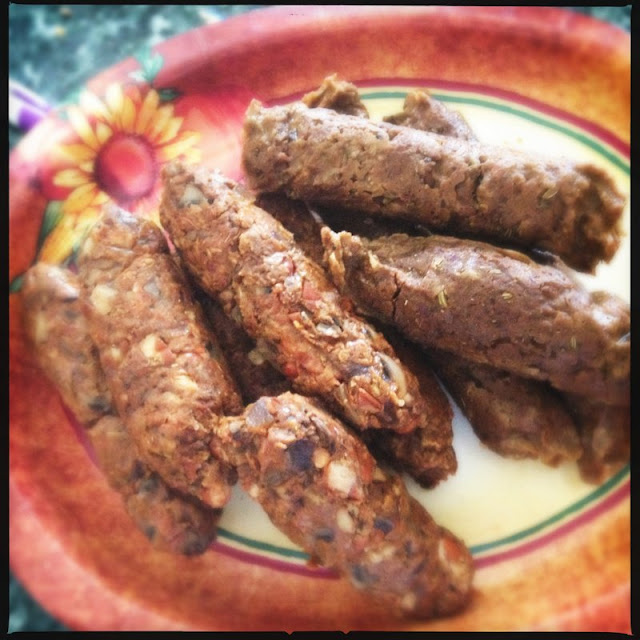 The sausages in the photo on the right side of the plate are the ones I've made several times.  Basically, they have most of the same ingredients as meat sausages without the pork fat.  Once you have the ingredients ready to go, the mixing goes really fast.  The thing about Vital Wheat Gluten, it will only absorb as much water as it wants to and nothing more.  In other words, if you put too much liquid in the recipe it will only take on the correct amount.  This is also a stepping stone to making Seitan (wheat meat).  I make mine really spicy and you can tweak the dry spice mix to your liking, so play around with them.  Here's the link to the recipe I used.  Leave out the oil, it won't make a difference.

Serve both on a whole wheat bun with your favorite toppings.  No oil fried potatoes and onions are great, or onions and bell peppers, or onions, bell peppers and spicy marinara sauce.  Have fun with them.