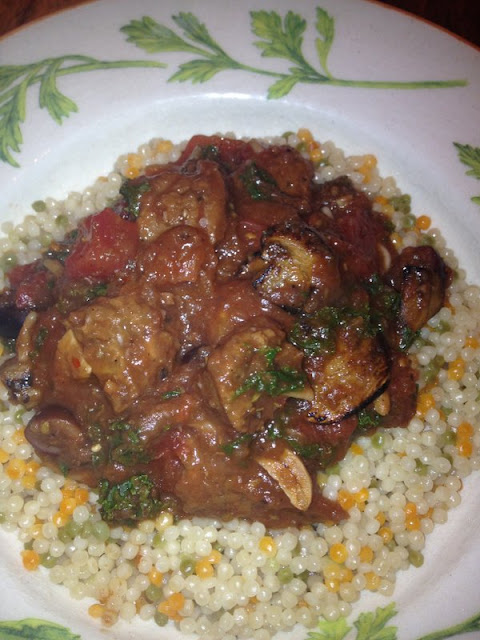 Another one of those I don't know what to make for dinner nights led to this delicious meal.  I had some leftover frozen roasted tomato marinara so I looked at what other things in the fridge would work with this.  I had some frozen sausages, the first version in the post "Sausages 2 Ways", Kale, baby Portabella mushrooms and tricolor couscous (I used Bob's Red Mill Tricolor Pearl Couscous [aka Israeli couscous]).  Sounded interesting, here's what I did:


Sliced the whole package of baby Portabella mushrooms.  Heated a non stick pan until smoking hot and added the sliced mushrooms.  Don't touch for a couple of minutes...if they start to smoke, turn them down.  They will start to release their liquid so flip them over in the pan.  After another minute they should be starting to brown up.  When they get to where you want them, add a cup of white or red wine and let it reduce down (about half the amount of liquid).  Add 2-3 cups of the marinara sauce, the sausages either sliced or whole, cover and wait until the sausages thaw a bit.

Cut out the vein of several Kale leaves and slice them up into 1 inch ribbons.  Throw them in the pan with the marinara and a half cup of water.  Cover and let it cook over low heat.

In another pan add 1 1/4 cup of water.  Bring to a boil and add 1 cup of the couscous (any kind).  When all of the water is absorbed they should be done, but check to see if they are al dente.

Put the couscous in whatever you're serving it in and add the sauce.  Enjoy.... 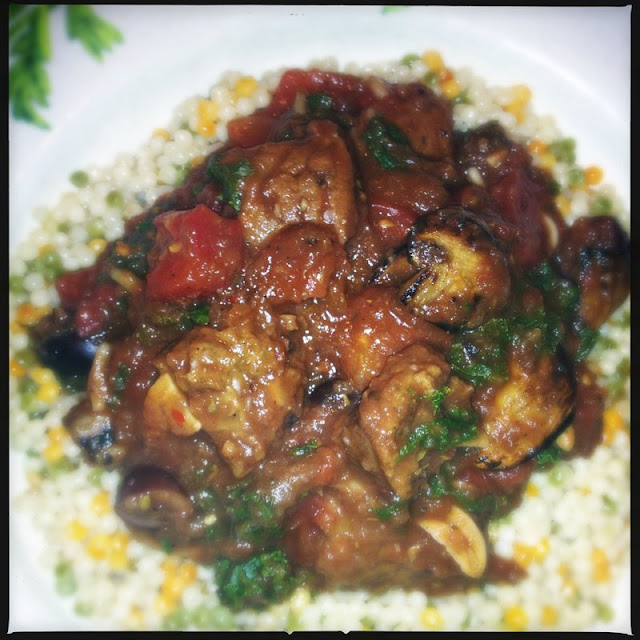