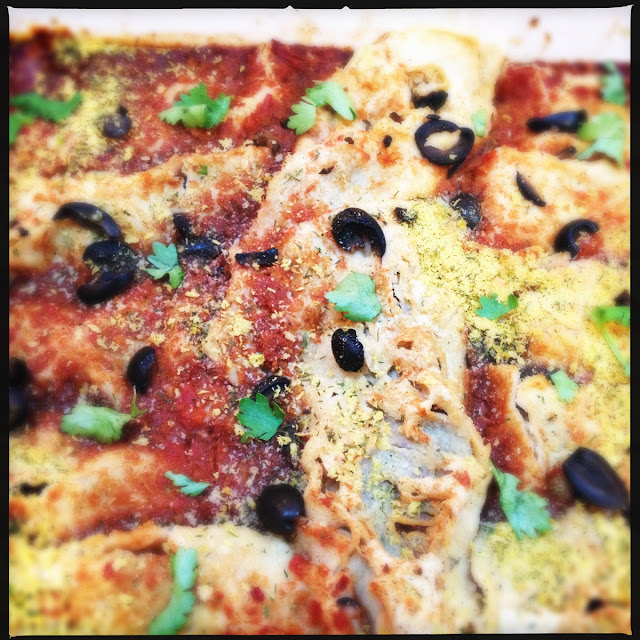 OK, this was so easy because I cheated the whole way.  I just wanted to make something quick, easy and delicious.  I went to my favorite grocery story and checked out the backs of several types of taco seasonings and enchilada sauce packets.  I had a couple things in mind when comparing brands and they were no dairy (some actually had some), no oil (even though these are dry packets, some still listed oil) and not too much salt.  After that, I followed the instructions on the packets.

For the filling I used TVP (or you can use TSP).  I rehydrated it in boiling water for about 10 minutes.  I wanted to end up with about 3 cups, so I would start with about 1/2 cups of dry and just cover in the boiling water.  I also cut up one whole onion and added it to a hot non stick skillet.  When the onions begin to stick, wait about a minute more then add some water.  Once browned, follow the instructions on the taco seasoning packet for the meat.  Squeeze out as much water as you can from the TVP and add it to the onions and spices.  If it starts to dry out, just add water or vegetable stock.

You will need about 15 corn tortillas, a large can of Rosarita Fat Free Refried Beans, sliced black olives (as many or as few as you like, 15 oz can of corn (drained and rinsed), Cilantro for garnish, nutritional yeast for garnish (and that cheezy taste).

Pour some of the enchilada sauce on the bottom of a 9 X 13 inch pan.  Fill each tortilla with about 1 1/2 tablespoons of refried beans, 1 1/2 tablespoons of TVP Taco mixture (you can also use meat crumbles which is basically the same thing only more expensive), about a teaspoon each of the corn and olives.  Fold them either in half or in a circle and place in the pan on the sauce, seam side down.  Continue until the pan is full and cover them with the remaining enchilada sauce.  Cover pan and put it in the oven for 15 minutes covered.  When you uncover it  sprinkle sliced olives and nutritional yeast on the top and continue baking for another 15 minutes uncovered.

When you take it out of the oven, garnish with chopped or whole cilantro leaves.  Serve it with guacamole and you'll be in heaven. 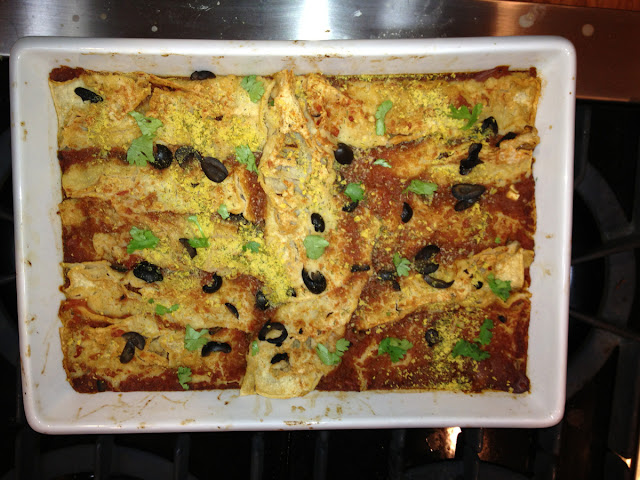