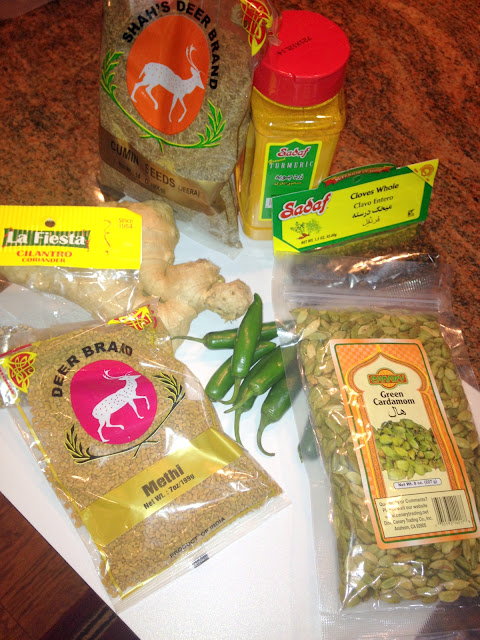 I haven't posted much as I've been out of town on business.

Travelling can be challenging as a plant based foodie, so I was thankful that my friend Vik, from Nepal, had us stay with some Nepalese friends of his that live in Half Moon Bay.  When you stay at someones home you eliminate the worry of finding something to eat while travelling to an area where you don't know the restaurants.

What a great time.  I just absorbed so much of what Vik's friend Ram and his family were cooking.  I've always had a love for Indian food, but I think Nepalese food takes it to the next level.  There were spices I've never really cooked with and some that I've used but in more traditional ways.  Lots of fresh ginger, garlic, cilantro and chilies (Serrano), Cumin seed and powder, Coriander seed and powder, and Fenugreek seeds (I've had it as tea, but that's it.  It's known in Nepal and India as Methi), cloves, and green cardamom seeds.  It was fascinating watching them cook and the sauces were amazing.

Now the challenge is to take what I observed and turn it into 100% plant based meals with no oil.  They eat lots of white rice, black beans, lentils, greens like mustard and spinach, chicken and lamb.

Keep checking back as I journey into this new flavor of food.

As I was walking around at the gift show in San Francisco I stopped by a booth that was displaying jute bags and I met the CEO of the company's wife Colleen.  We started talking about the sustainability of jute and the possibilities of it and somehow got onto the food you get in a hospital cafeteria.

I told Colleen that my business was doing gift shows at hospitals and that I often laugh at how unhealthy hospital the food is since it's a place for healing.  She said she spoke with someone that worked at a hospital about that as well and was told that when they try healthy foods they just don't sell.  I mentioned that I was 100% plant based vegan and that made it particularly hard to find anything to eat other than salad when I'm working at a hospital.  She laughed and said she was a vegan as well, and that was the end of our discussion about Jute.  We could have talked forever about the trials of eating plant based diet, but we did exchange blogs so check her out Waking up Vegan.

From what I can tell, her family is becoming more accommodating with her lifestyle change and many of her family members are embracing plant based whole foods as well.