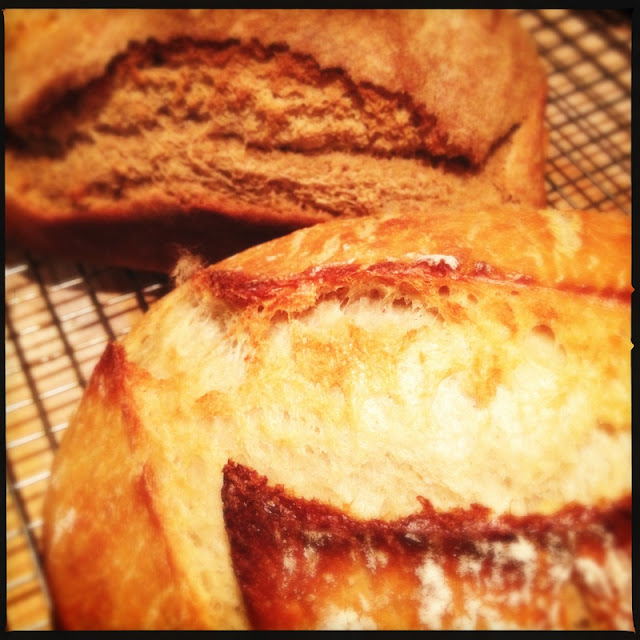 Sourdough bread has been an obsession of mine for the past couple of years.  I've enjoyed growing, feeding, killing (didn't really enjoy that) and growing again, my sourdough starter (the mother sponge(s)).  I'm going to attempt to break this down in a couple of parts.  If you're at all interested in this baking art form, you'll probably find this fascinating.  I'm going to give information that's not as much scientific as it is knowledge I've gained by reading and experimenting over the course of two years.

Sourdough is the yeast that was used in leavened breads (breads that rise)  for longer than, I think, even historians can pin point (perhaps as early as Ancient Egypt).   Modern day yeast (dry active, instant, rapid rise etc.) which are used commercially and in most home baker's kitchens has only been around for about 70 years.  Prior to that bakers got their yeast from beer brewers.  Sourdough is a leavened bread that has a distinctive sour taste created by the fermenting of the starter and then the actual dough.

The initial work on sourdough comes from the creating of the starter.  It usually takes about a week of feedings before you get a starter that is able to support the work needed to create a risen bread.  After you have your sourdough you need to feed the dough that you store in the refrigerator.  The general consensus is that you need to feed it at least once a week, though I have left my starters much longer with no disastrous consequences. 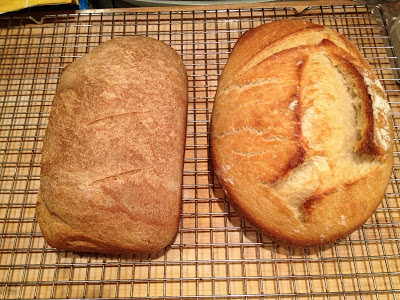 In a nut shell, what sourdough starters do is pull naturally occurring yeast from the air into the starter and it feeds on the sugars created from the flour that you use to feed the starter.  Once my starters became active, I generally keep two cups of whole wheat and two cups of white starter on hand at all times.  When I feed them I stir down the starter, pour out 1/2 of it and feed it again with one cup of flour and 2/3 cups of water (this creates 100% hydrated starter).  The one cup flour to 2/3 cups of water are equal quantities by weight. once the starter has doubled in volume I stir it down and use it in my bread.  To create the 100% whole wheat starter I started with white flour starter and only fed it with whole wheat flour.

I'm sure the jury is out on this next point, but research is beginning to support studies that show white sourdough bread (the kind I'm talking about here that is the truly fermented bread that takes 8-12 hours to make as opposed to commercially made sourdough that uses dry yeast) may show lower spikes in blood sugar.  This article touches on that and I'm sure it will continue to be discussed and argued.  The long and short of it is that they've proven diabetics do fine if not better eating truly fermented white sourdough bread than even whole wheat (though I think they mean whole wheat dry yeast bread as I don't think the study covers whole wheat sourdough).

Coming up in the next part I will share step by step instructions on how to create whole wheat and a white sourdough bread (pictures of both are shown here) including feeding the starter, knowing when the starter is ready to go and baking the bread.  Oh, by the way, the bread I make is n(o)il, though I do use a little Pam or olive oil if I am allowing the dough to slow rise in a container overnight so that it doesn't stick. 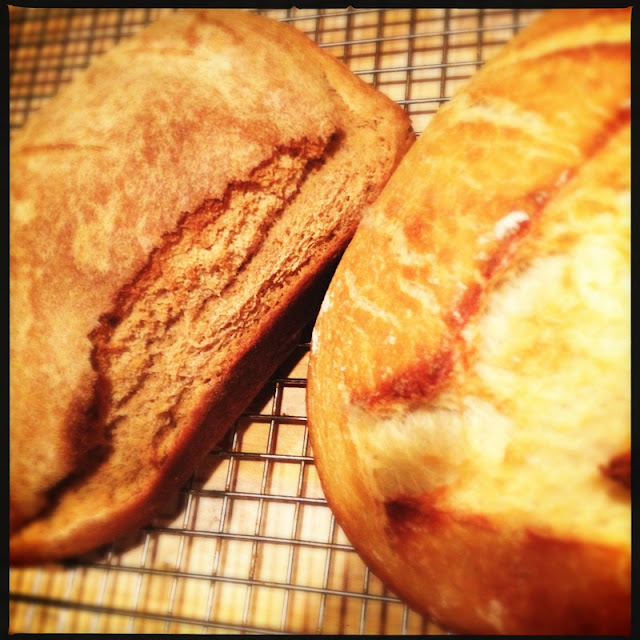