OUT OF BREAD? TRY THIS 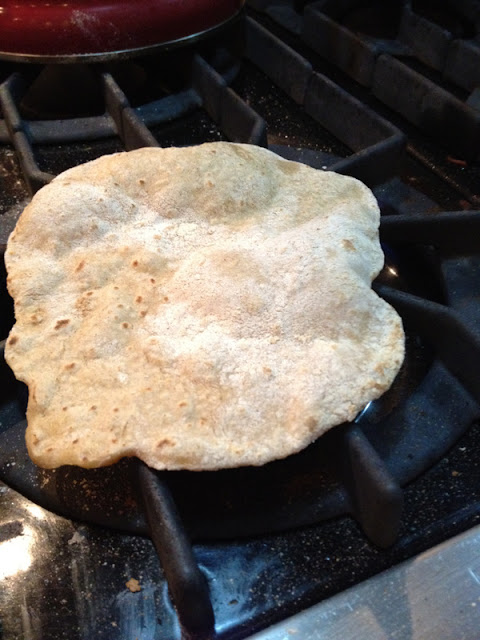 Put the atta flour and salt in a bowl and make a well in the center.  Add the water to the well and slowly mix the flour in with the water.  When you have a nice dough, should be slightly tacky but makes a nice ball.  Adjust the flour and water.

Let it rest for about a half hour.

While it's resting, get your rolling pin out and clear a place to roll Roti.  If you don't have a rolling pin, use a wine bottle or vodka bottle or any other surface that you can think of.

When you're ready, heat a non stick pan on the heat with no oil.  Should take about three minutes.

In the meantime, sprinkle your counter or cutting board with a good amount of atta flour for the rolling.  Then, pull off an amount of dough to create a ball about the size of a golf ball.  Roll it out, constantly turning it, until it's about 1/4 to 1/8 inch thick.  You may need to keep putting flour on the dough and surface to keep from sticking.

When you're ready, place the roti (doesn't have to be a perfect circle) in the hot pan.  Turn it after 30 seconds.  It's really easy to just flip it if you're daring enough.  Cook for another 30 seconds, then flip it onto the hot burner and it will puff up like a balloon.  Have some tongs ready to immediately remove it.

You can use this for a wrap, for dips like hummus, or just eat as is.  Quick, easy and healthy.
Posted by Ken