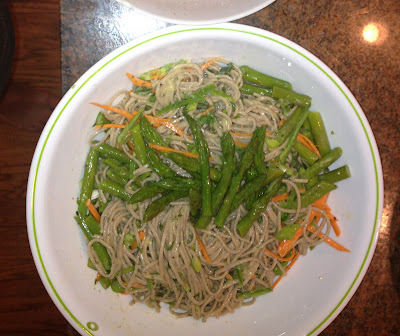 So, as I'm know to do, I through this together last night and it was incredible.  And as many who know me say, "what's the recipe"?  Well, since I made it up I'll attempt to re-create this for my blog.

Dressing:
juice of two small oranges
juice of one lemon
4 cloves of garlic
1 tablespoon dijon mustard
1 tablespoon rice wine vinegar
1 bunch each of basil, min and cilantro
salt and pepper to taste
1 tablespoon arrowroot (optional)
blend all of the ingredients and set aside

Vegetables:
Thinly slice the following to about the size of a match stick.
1 carrot
4 scallions (that's green onions for those that don't know)
1 jalapeno (de-veined and de-seeded unless you're daring to go whole hot)
1 yellow and/or red bell pepper. 1/2 of each is more colorful
sliced Green beans blanched (which means boiling water for one or less then an ice water bath)
Aspargus sliced on the diagonal about 2 inches (steamed tunil just soft or blanched for 30 seconds)
1 tablespoon grated fresh ginger (best way to peel ginger is with the eating end of a spoon)

Boil the Soba noodles according to the package.  I didn't rince them in cold water as the package said, I just drained them.  The starch left on the warm noodles helps the dressing stick since you're not using oil.  Keep a cup of the boiling water in case the pasta is too dry.

Put the noodles in a large bowl, toss them with the dressing, then add all vegetables and toss.

Serve it with a nice salad on the side and you'll be clawing for more.  We had summer garden fresh tomatoes and cucumbers, with hass avocado mixed with fresh lime (one lime) and salt and pepper.
Posted by Ken